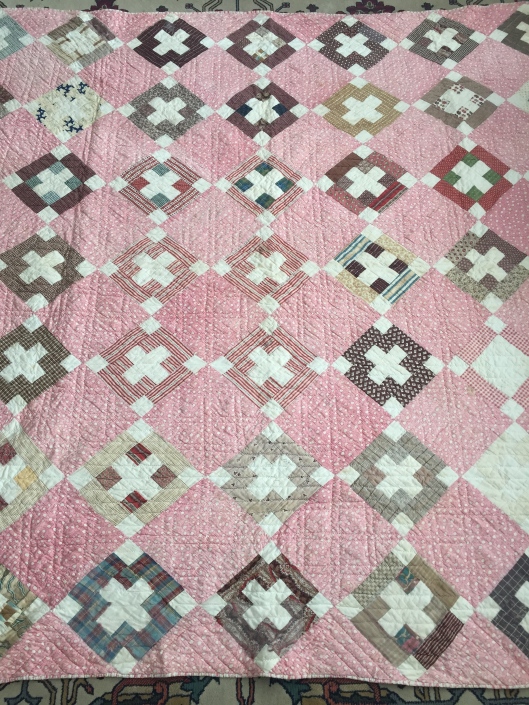 The ‘Collins’ quilt was purchased by Eileen and Bernie Donnelly in 1994 from Peterborough, New Hampshire, USA. It is a lovely old Album quilt with signatures of the Collins family and dated 1849. The names on the quilt are Thomas G. Collins, Samuel B. Collins, Smith Collins, Daniel Collins and Mrs Lewis Collins. They also added their location as Halifax and West Halifax.

The block is a simple but appealing Album Block. There are 49 blocks set on point with an alternate plain block in a lovely double pink and white floral. The blocks are pieced from scraps so there is a good variety of interesting fabrics to study. 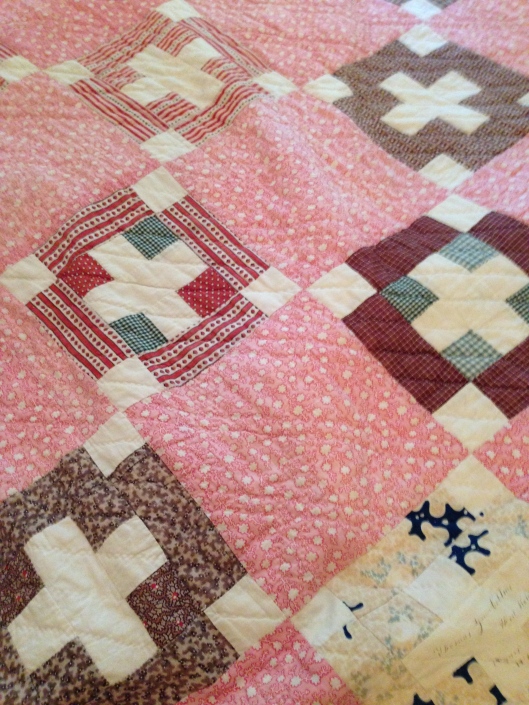 There is some wear to this quilt due to its age and it appears to have been well used. Eileen has noted that a brown fabric has disintegrated, due to mercury being used in the dyeing process of brown fabrics in those days. Eileen has carefully stitched tulle over these areas to protect the fragile fabrics. The quilt backing is a plain cream calico. The quilt is hand pieced and hand quilted. 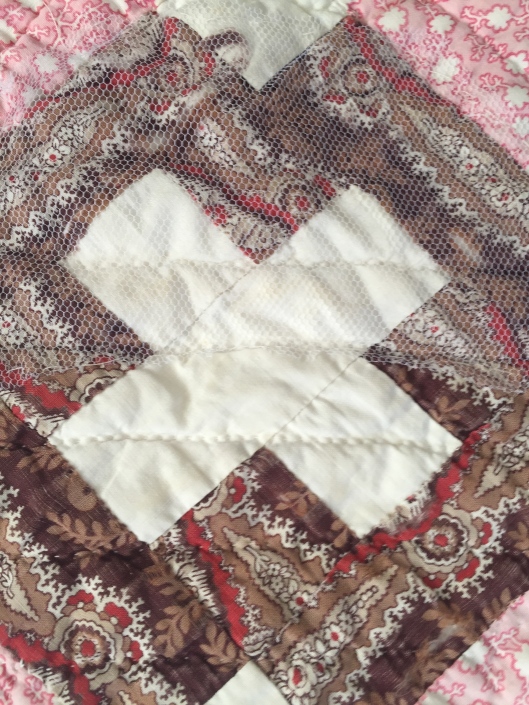 Tulle stitched onto the quilt to protect a fragile area.

Bernie researched the history of the family and traced the Collins family to New England. Bernie traced the family back to 1740 to a Daniel Collins who married Alice Pell in New London, Connecticut in approximately 1762. Daniel and Alice were the Great Grand Parents of those who signed the quilt. Bernie also found a Robert Collins who married Ruth Browning in New London in 1809. They had 10 children including Lewis 1817, Daniel 1819, Samuel 1823 and Thomas G. 1831. These signatures are on the quilt along with Mrs. Lewis Collins. (perhaps she was widowed). Thank you Bernie and Eileen for the wonderful research and preservation work on the ‘Collins’ quilt and for providing me with the information.

Hope you enjoyed the story of the ‘Collins’ Quilt. Happy Quilting from Janette – The Plain Needlewoman